Since commit 5881ed4, there is now an Encrypted session tri-state checkbox in the login dialog, to be certain that the connection to the mail database is encrypted.

It’s still possible, as it has always been, to have finer control over encryption by setting directly sslmode as a libpq parameter in the “More parameters” text field of the dialog.

In that case, the new checkbox should be left in the “neither checked or unchecked” state, so as not to conflict with the setting in the other field.

As an alternative, the environment variable PGSSLMODE will be be taken into account if set in the environment. See Environment Variables and SSL Support in the PostgreSQL documentation for all the details.

Manually setting sslmode is necessary to use the more specific modes verify-ca or verify-full, which in addition to request an encrypted connection, require that the server-side certificate is signed by a trusted authority.

Now, what if the server is not set up to support TLS? There’s still the possibility of encrypting the connection through an SSH tunnel, provided you have a shell account on the server, or at least on a proxy server closer to the database server, and which itself can connect securely to it.

An SSH tunnel requires finding a free-to-use TCP port on the client machine running the Manitou-Mail user interface. It can be 5432, the default PostgreSQL port, if there’s no local PostgreSQL instance on that host, otherwise an unused port should be taken. For example, if using 4000, this command would do:

Then in Manitou-Mail connection window, the host should be set to localhost and to port to 4000 through the “More parameters” field. When the user interface will connect to localhost:4000, ssh will do the rest by having the remote server connect to its own localhost at port 5432, and from then pas all the traffic between the user interface and the database through itself, all encrypted. 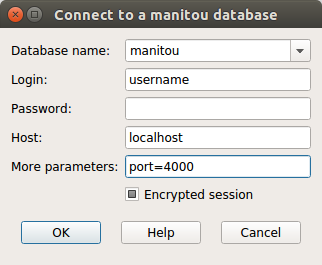 In addition to the encryption, this method also alleviates the need for pg_hba.conf to allow the IP address of the remote user interface, since what connects to it is the ssh server running locally on the database server itself, or close to it in the case of a gateway to the LAN.