Starting with version 1.6, Manitou-Mail will allow the creation of users and groups from within the user interface, as shown in the screenshot below: 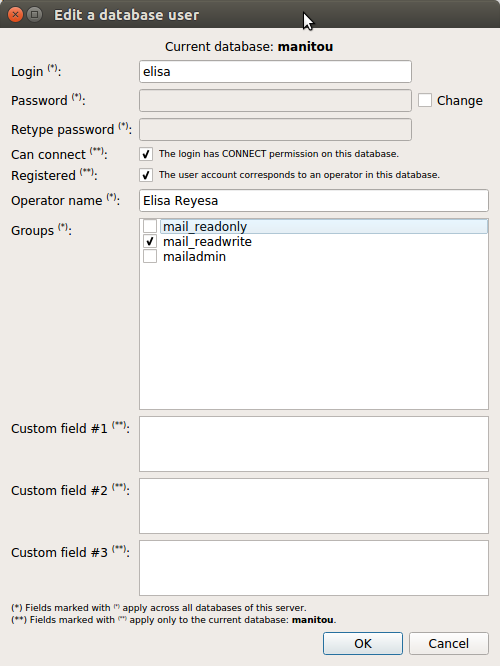 Although PostgreSQL has merged users and groups into “roles” years ago (since version 8.1), we intentionally stick to the old terminology, because it’s easier to describe the model. Users are accounts for persons connecting to the database. Groups are entities having a set of permissions, and to which users are assigned. Users can belong to multiple groups.

Under the hood, users correspond to PostgreSQL roles having the LOGIN attribute, so they can log in (assuming proper permissions), whereas groups are roles that don’t have this attribute. Permissions are associated to groups through SQL GRANT commands.

Manitou-Mail chooses to associate permissions to groups, instead of individual users, given its focus on team work and shared mail corpuses. For a set of permissions that apply to a single person, a group will have to be created with only that user as member.

The set of permissions currently handled is shown in the snapshot below. More fined-tuned permissions will probably be added in the future depending on users needs.

Version 1.6 can be built from the git repository; pre-compiled binaries and packages will be made available soon.