Importing in parallel from a single source  is really enabled in manitou-mdx since commit 6a860e, under the following conditions:

The previous post showed how to create a list of all mail files to import from the Enron sample database.

Now instead of that, let’s create a list splitted in chunks of 25k messages, that will be fed separately to the parallel workers:

The main command is essentially the same as before. As a shell variable:

Based on this, a parallel import with 8 workers can be launched through a single command:

This invocation will automatically launch manitou-mdx processes and feed them each with a different list of mails to import (through the –import-list={} argument). It will also take care that there are always 8 such running processes if possible, launching a new one when another terminates.

This is very effective, compared to a serial import. Here are the times spent to import to entire mailset (517401 messages) for various degrees of parallelism, on a small server with a Xeon D-1540 @ 2.00GHz processor (8 cores, 16 threads). 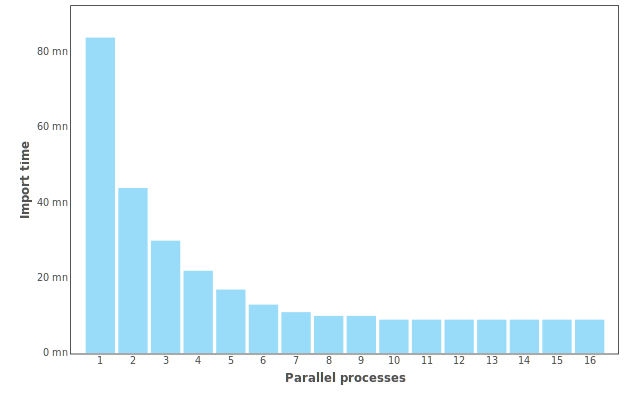